This photograph of Jakatar was featured in a "Used Boat Notebook" article published in Sailing Magazine. The writer David Liscio contacted me, through the Corbin 39 Association, and I made some observations about Corbin 39 sailboats which he included in the article. 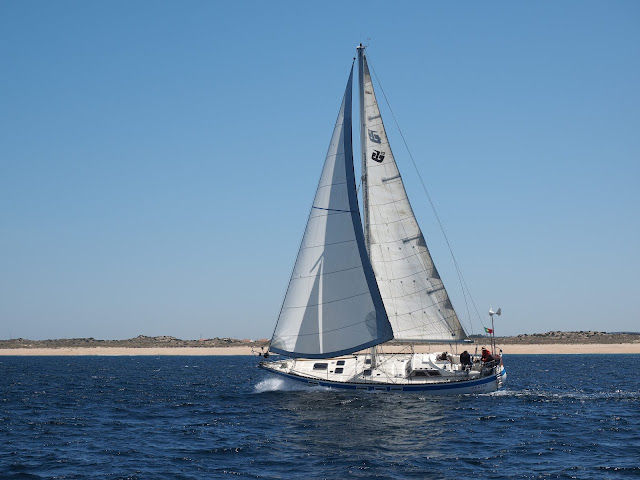 Another shot below, now with a solar panel instead of the wind generator. I much prefer the solar panel. No noise, nothing moves and, hopefully, nothing breaks down. 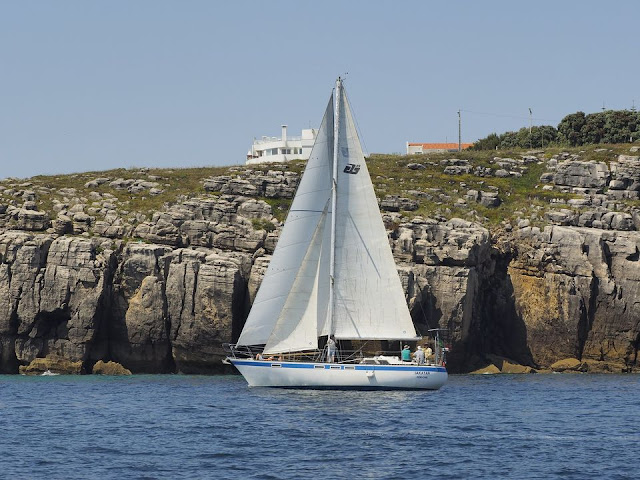 Sailing Magazine's Used Boat Notebook is meant to give readers summary information about a sailboat's merits. This was David Liscio's summary conclusion: "A sleek, rugged, bluewater cutter, the Corbin 39 merges sea-kindliness with comfort and proves ideal for a cruising couple or small family."

What about the interior, you may ask. The video below takes you on a tour of Jakatar's interior. Note that Jakatar is a model of simplicity, perhaps excessively so. Even so, it's very spacious and cozy, especially if you like wood finish...lots of wood.

I'm planning to visit the boat in the coming days to spend a week of lockdown time aboard. Lockdown, in this case, is a 5-day nationwide ban on the crossing of municipality borders.

More than 30 orca attacks on sailboats since July 2020 could have a devastating impact on thousands of yachts sailing through the Portuguese and Spanish coastline each year.

The video below shows one of the first attacks. Courtesy of the Guardian.

As far as I know, the first incident occurred on July 23, 2020. A sailor called Alfonso Gomez encountered four orcas that rammed his boat for over 50 minutes. "Once we had stopped, they came in faster at 10 to 15 knots, from a distance of about 25 m," he said. "The impact tipped the boat sideways."

On the previous night, at about 11:00 p.m., a few killer whales forced Beverly Harris and Kevin Large's 50-foot sailboat to a stop and spun it around several times for about 20 minutes. "I had this weird sensation," Harris said, "that they were trying to lift the boat." Earlier that very night, the whales struck Nick Giles' 34-foot sailboat with such force that he was left without steering. The killer whales then pushed the boat for 15 minutes before finally leaving.

Since that day, more than 30 similar incidents have been reported. On September 23, 2020, Spain's transport ministry even banned yachts less than 15 m long from sailing in the 60-mile area in the Atlantic coastline from Ferrol to the Estaca de Bares Cape, where the attacks were occurring.

However, the attacks have continued, now along the Portuguese coast, especially near Sines, a popular anchorage and marina for transients. It seems that 3 juvenile orcas (or the group to which they belong) have perpetrated all known attacks. And that makes sense since all attacks have occurred in only one area at any given time. The locations have changed because this group of orcas roam the coastline searching for the best hunting spots. Apparently they have settled in the Sines area for now.

The last attack was reported a few days ago when the young delinquent orcas attacked an 8-m sailboat crewed by three French sailors on their way to Porto Santo, a small island near Madeira. The whales broke the boat's rudder and they had to be towed into the port of Sines.

It seems that these young orcas are on a playful mission to destroy rudders and disable vessels. As far as I know, they have only attacked sailboats, likely due to the length and shape of their rudders.

So far, authorities have issued recommendations on actions to take when being attacked: stop sailing and/or motoring; do not perform any avoidance maneuvers; and shut everything off, particularly the depth sounder. It is believed that they are more likely to get bored of biting and ramming rudders if the vessel stops moving.

Have a look for yourself.

Below is an informative and well written summary by BBC about what's been going on:

If I get attacked, I'll be sure to film it or take photographs.

"A man is never lost at sea."  - Ernest Hemingway

Is Hemingway's motto also applicable to a mooring? 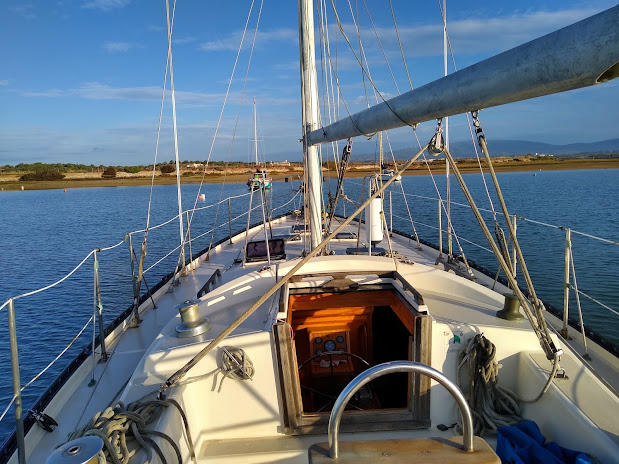 Jakatar has been on a mooring in Alvor since July 2019. What are the advantages and disadvantages of keeping a boat on a mooring 350 km from home compared to maintaining it at a marina 15 km away?
Marina - Mooring Costs Comparison
What I like (or used to like) about keeping the boat at a nearby marina:
1. Easy to visit without the need to take and deploy a dinghy;
2. Electricity and water on demand;
3. Other boaters to socialize with;
4. Easier to do boat maintenance and restoration work;
5. The annual 1-month round trip to the Algarve was always a mini adventure.
What I like about keeping the boat on a mooring farther away:
1. Visiting the boat is like going on a holiday, an escape;
2. Less expensive;
3. Greater sense of adventure, even though I already live in a beach town;
4. Less worries about fenders, dock lines and storms (the mooring field is way more protected, and I've never lost a minute's sleep due to bad weather.
Conclusion:
Since I like both options, I should own two sailboats.
Ideally, I would buy a small inexpensive boat and keep it nearby for day sails. It is a somewhat known fact that small boats are sailed way, way more than larger boats. Haven't bought the small boat yet because I've been too busy crewing on friends' boats and on short and multi-day trips. 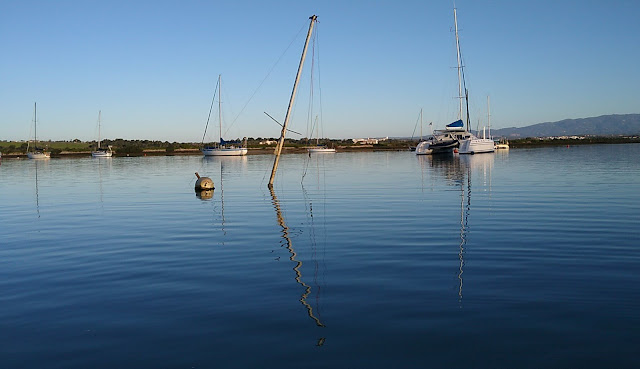 Jakatar in the background, waiting for some action. On my last visit, on October 26, the sunken boat's mast was visible only at low tide. Somewhat dangerous in my opinion. 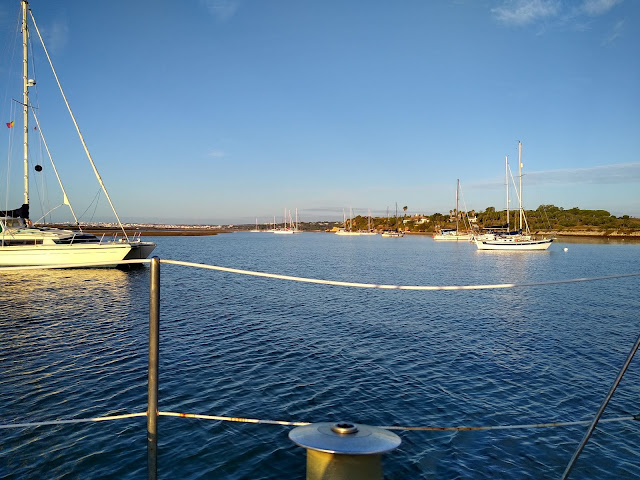 The channel leading to the entrance. I've never seen so many sailboats anchored/moored here in winter with people living/staying aboard. Must be virus refugees. 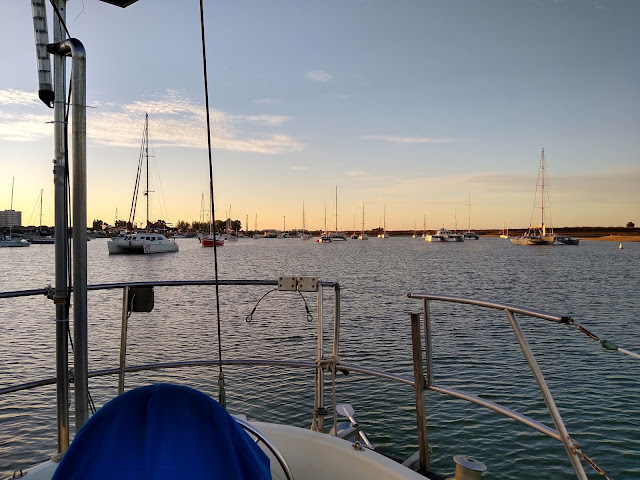 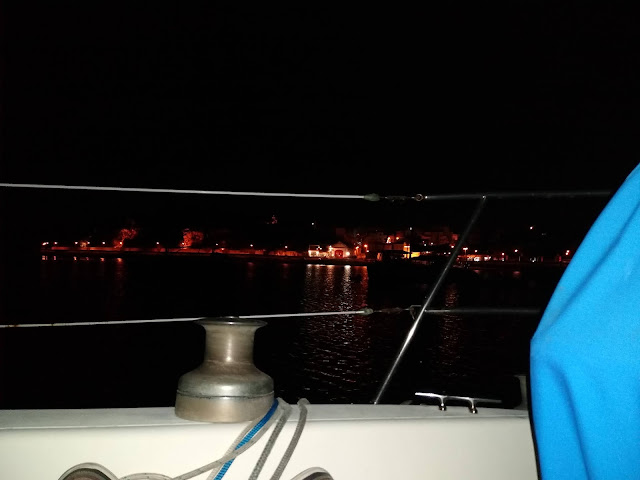 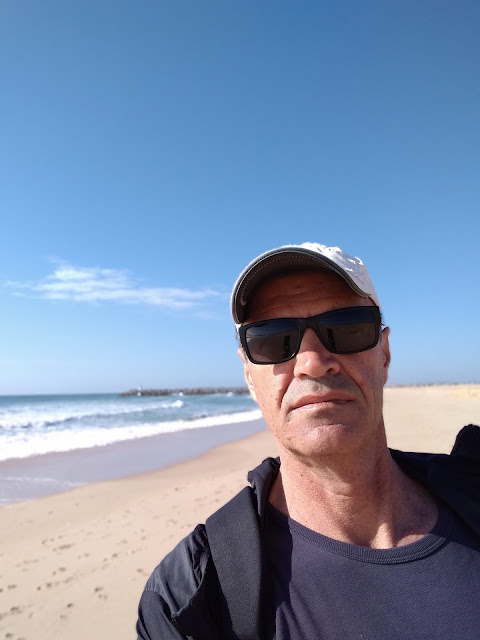 Going for a walk on the beach. Ironically, I do a lot of walking on land when I visit Jakatar.
Anchorage