We've had nothing but rain, strong wind and dark skies for weeks. What's a man gonna do?

To cheer up, I purchased an online book called “A Guide to the Good Life: The Ancient Art of Stoic Joy.” Maybe I should lend the book to the owner of the boat below. On second thought, this is the third time the boat has sunk, so maybe the owner is already a stoical guy. 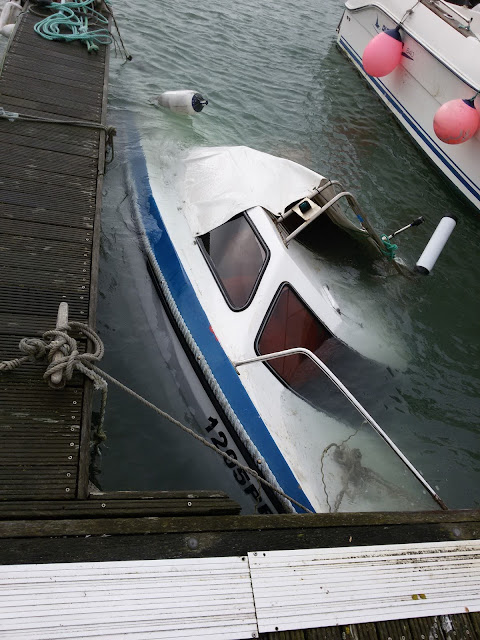 I lay down on the pilothouse settee, sheltered from the rain, switched on the tablet and began to learn about attaining "stoic joy".

The Oxford dictionary defines stoic as: "A person who can endure pain or hardship without showing their feelings or complaining." This, by the way, is also a good definition of a sailboat owner!!

On the other hand, Stoic, as defined by ancient Greeks and early Romans, is a totally different game. But then again, I have a degree in Philosophy so I have a penchant for dabbling in useless ideas when the weather prevents me from doing boat work.

The first step in attaining stoic joy is to practise Negative Visualisation. This technique helps you to appreciate what you already have instead of constantly dreaming (or complaining) about what you would like to have.

Negative visualisation requires imagining a potential misfortune. First, I imagined having arrived at the marina to find Jakatar sunken. But that didn't work too well because a sunken Jakatar was simply beyond my imagination. Not because it would be the end of the world but, rather, since it seemed highly unlikely.

On the second attempt, I imagined having a car accident on the way to the marina and waking up confused on a hospital bed, hooked up to tubes and immobilised by multiple fractures. Unfortunately, an all-too-real experience for many people and not too hard to imagine.

Instead, here I was calmly reading a book in a sailboat, not even working on a weekday. How in the world did I get so lucky? Comparatively, all my troubles (yes, I have them too like most people) amount to a heap of nothing. In fact, if Jakatar had sunk at that very moment, it wouldn't have been that bad. I would still have a car and a house. If the car broke down, I could walk, and what a pleasure it is to walk along a coastal road whistling and kicking pebbles. If the house burned down, I could buy a camper trailer, park it down by the beach and probably be all the happier for it. OK, that's enough stoic joy for today.

For a more detailed and entertaining description of stoicism, check out Mr. Money Mustache. The Mustache blog is worth its weight in gold (does an electronic blog weigh anything, I wonder?). 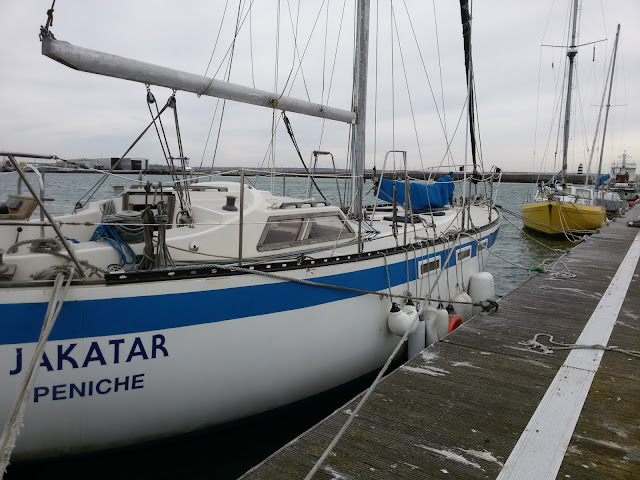 Two days before the storm Felix hit, I moved Jakatar to the transient dock for better protection from the forecast 10 metre waves.

During the storm, one of the two support bolts on the rusty finger of my slip broke and its barnacle-encrusted concrete float went belly up. It would have given Jakatar a permanent gouge job. Good thing I moved. What stoic joy!!!!

I had to leave the boat at the transient dock for about 2 weeks until the marina staff built a new dock finger for my slip.

Stay tuned as I embark on a new chapter of my life called "The stoic joy of boat maintenance." Just kidding, I think.
Posted by Horatio at Monday, April 16, 2018