I bought a bus ticket back to Olhão where a water taxi (25 euros) ferried me back at break-neck speed to Jakatar, anchored just as I had left it, except for some new neighbors. 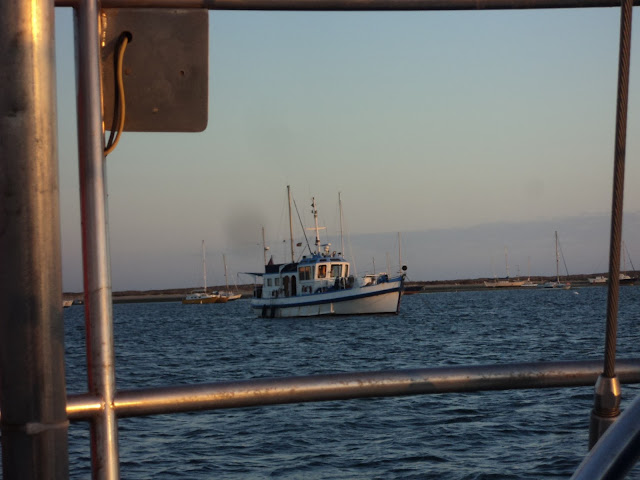 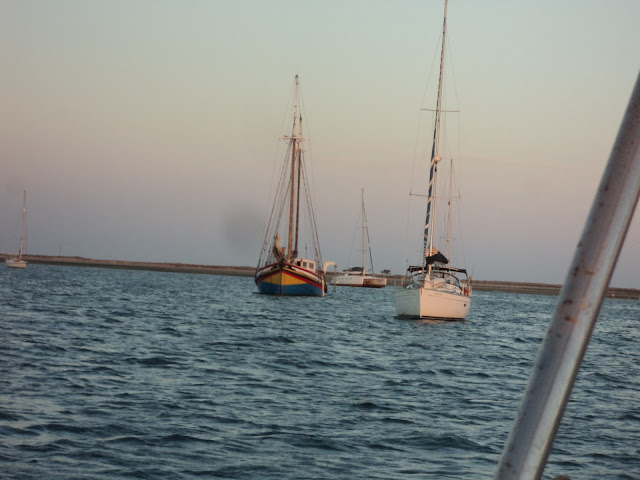 I had planned on going ashore to Culatra for a cold beer. Instead, I was struck by an attack of laziness and a deep desire to basically stare at my toes - again. I brought the mat and pillows into the cockpit and thoroughly enjoyed doing nothing and thinking nothing, to the extent that I couldn't even be bothered to get a second glass of wine. 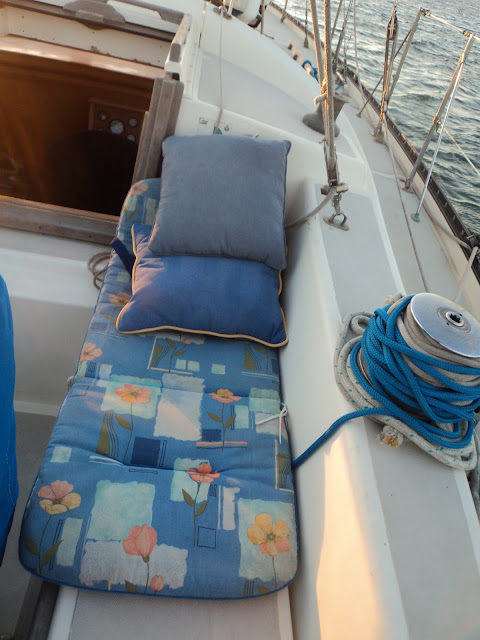 Early the next morning I raised anchor to a weird surprise (I never take pictures of weird or exciting stuff because I'm an amateur blogger). Anyway, with no wind and no tide the chain came in fairly easy until the chain was totally vertical. Then it wouldn't budge an inch.

"It's really buried" I muttered to myself, switching the handle to the low gear on the windlass. Had do do some grunting to break it free and get it up ever so slowly. Then I saw a huge mass of weed thick as a tree break the surface.

The huge blob on my chain was way too thick to hump over the bow roller. I leaned over the bow with a serrated knife and started hacking at the weed that, as I quickly discovered, was concealing a big tangle of nylon lines.

Hell, I could hardly see the anchor. I started cutting like crazy, pulling in the chain as I cleaned it and occasionally checking whether I was drifting onto nearby boats, finding it strange that I remained in the exact same spot. When I finally reached the anchor, I could see that it had impaled a lobster pot attached to more taught lines still stuck on the bottom. I dispatched the remaining tangle in a samurai slashing frenzy, stood up sweaty and took a deep breath. I felt like the winning gladiator, like I had just battled with the devil and won, like I'd had an exciting adventure to start the day...Alive in the middle of a calm lagoon on glorious sunny day! And nobody to film it and upload it to Youtube.

The Kobra anchor had held through some strong wind, and now I wasn't sure if it was because it had been held by all this crap or because it's a good anchor. Who knows.

After this sweaty workout I motorsailed to Alvor, with a quick stop at the Albufeira marina for diesel and water. I stayed two nights in Alvor's outer anchorage but could have easily stayed for a whole year, at least. 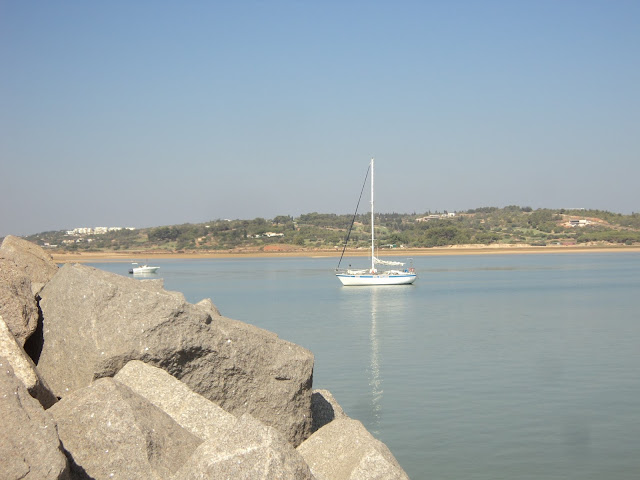 The weather was perfect, Alvor was nearly perfect, and 2 nights just didn't feel like enough.

Then I sailed (using the sails only) to the port of Sagres. I left after lunch and arrived nearly at sunset. The wind in port picked up and I was debating on whether to go ashore when a young bearded guy came by in a skiff.
"Are you staying the night?"
"Yep"
"Where's your anchor?"
"About 30 meters that way."
"Obrigado. I'm putting out a line of hooks for the night."
He barely finished talking when he threw the first buoy overboard, about 10 m from Jakatar. I shouted that it was too close, but he never looked back, just kept going, laying out the line. It was a hell of a long line, at least all the way to Martinhal beach where I lost sight of his stern light.

So I'm sitting there thinking, "fuck, shit and damn, what an idiot! If the wind veers east a bit, I'll have the line and buoy under me tomorrow when I want to leave. As I'm staring at the buoy, a trawler roars out of port at full throttle straight for me, which was the wrong direction for him, turns at the last second, leaving such a huge wake the dinghy nearly flew into the cockpit. What the fuck, has everybody gone crazy around here? Lost my appetite for going ashore.

Still dark the next morning I get up and can't see the fishing buoy anymore. Feeling a bit paranoid that it might be under the boat or caught in the propeller, I spun the propeller shaft by hand for a long time (advantage of having a Duramax shaft seal)...but it kept spinning freely. So I raised anchor and left in the semi-darkness, eyes peeled for the minefield of buoys near port, ready for the long trip to Sines against wind and waves.

Going by the beach anchorage, I started hearing the Cape Vicente lighthouse foghorn, even though there's not a wisp of fog to been seen. But sure enough, on the north side of the cape I motored into a blanket of fog that later kept alternating between bad and worse for hours on end.

Much later, when the fog cleared up, my long-time rich neighbor from Culatra, who must have been anchored in front of the beach, passed me, but not too fast, and I was barely doing about 5 knots. 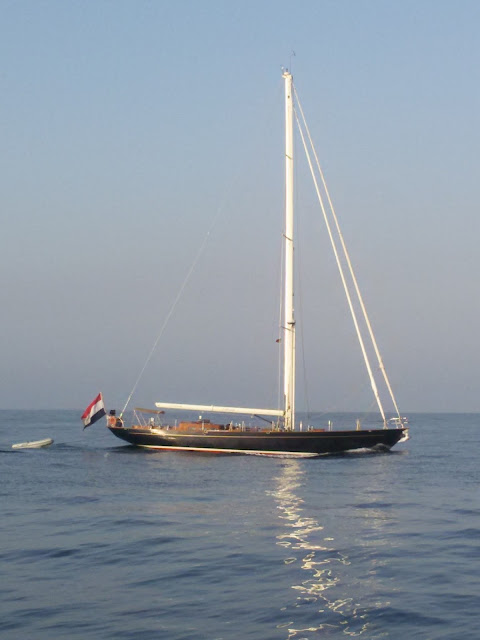 Arrived in Sines at sunset and anchored near the  rich guy's boat again. Stayed for two nights, ate at Adega de Sines for lunch and dinner (8 euros per meal including a jar of wine), took long showers (you can check in at the marina office when anchored, pay half price and get a card to use the facilities).

Also got up early for the trip to Cascais and, fuck a duck, my rich neighbor passed me again with much waving by me and his wife and barely a nod from him. Maybe he doesn't trust his wife around handsome solo sailors!!!!! Cough, cough.

Anchored in the bay of Cascais, this time far from the rich guy so his wife couldn't get a good view of me.

I was already feeling the "going home blues" so I decided (or rather, invented an excuse) that the conditions weren't very favorable for leaving the next day. Stayed 2 nights in Cascais, went for long walks, had lunch on the promenade and pretended not to stare at women on the beach. 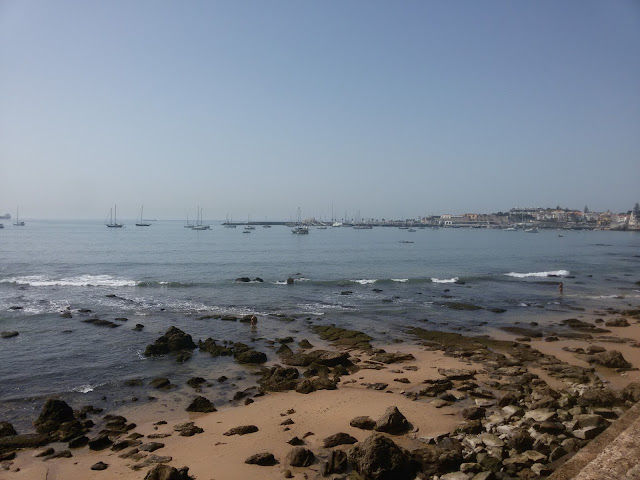 The anchorage in Cascais seen from the very long promenade. Jakatar is somewhere in the middle near the marina entrance, where I park the dinghy behind the fuel dock - not supposed to do it, but I haven't been arrested yet.

Had an uneventful sail (motoring and motorsailing) to Peniche on the last day, except for one thing I had never done before: at lunch time, near Ericeira where the water is another minefield of buoys, I stopped the engine sailed at 1 knot toward the Azores while I leisurely made lunch, ate it and had a coffee without a care in the world.