Sines to Alvor and Culatra

Anyway, I left Sines as darkness turned to dawn and then sailed most of the way to Alvor, for a total of 15 hours. Sailing past Sagres in late afternoon the wind was a notch worse than hellish. At one point my 11-ton dirty-bottom boat was doing 5.2 kt flying only the small staysail.

During the 3 nights I spent in Alvor I noticed three things: the place has slowly been filling up with private mooring balls, there's less cruising boats anchored (which could be related to the fact that many boats run aground if they follow the two channel buoys - that's what you're supposed to do, right, and yet there's a sand bar between them that's doable only near high tide, so you have to steer an arch from one buoy to the other) and the town is becoming insanely crowded at night with tourists. 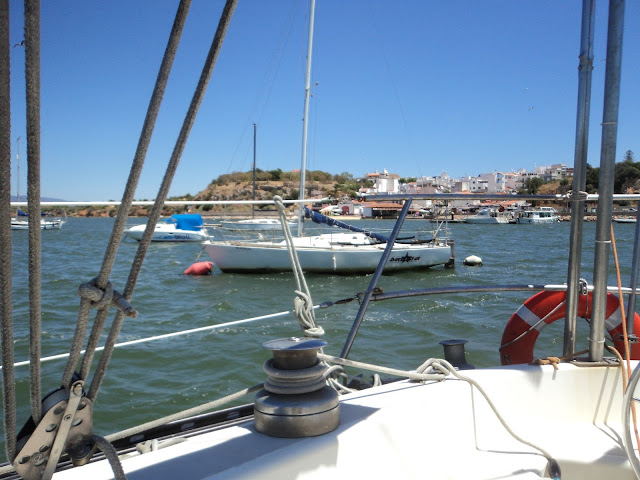 Next, I sailed to Culatra  ever so slowly. In two tacks I reached Albufeira where I anchored outside the marina breakwater for a rolly night. The next morning I motored into the marina and got 150 euros worth of diesel, 6 euros of gasoline and lots of free water.
I then sailed slowly to Culatra. About 4 miles from the entrance the wind fizzed out and I was forced to start the engine. In the anchorage, while getting the anchor ready a guy on a Belgium flag boat started acting like a lunatic screaming that I was too close. I made signs that I was just getting things set up. He kept shouting so I ignored him, after which he ran up to the bow of his boat and nearly had a fit...he was thrashing his arms so wildly I was worried one of them might fly off his shoulder.

Did he think I was so stupid as to anchor right in front of him? Feeling a bit ticked off about it, I took my time about getting the anchor ready as his screaming got louder and louder: I untied the two lines securing the anchor, released the anchor clutch, carefully eased the anchor off the roller until it was dangling close to the water, fished out the anchor ball, the anchor snubber, and a line I tie to the chain in case the snubber fails. By then I was about 15 m away from his boat.

When I stood erect, looked around and made my way back to the cockpit, he fell into silence and disappeared into his boat, realizing I had no intention of anchoring there. I had already picked a nice open spot farther ahead.

In the end he got the last laugh, as you will find out in my next post. Not only that, much later, back in Alvor, I was placed in the same position as the screamer during the most pathetic anchoring attempt I have ever witnessed.