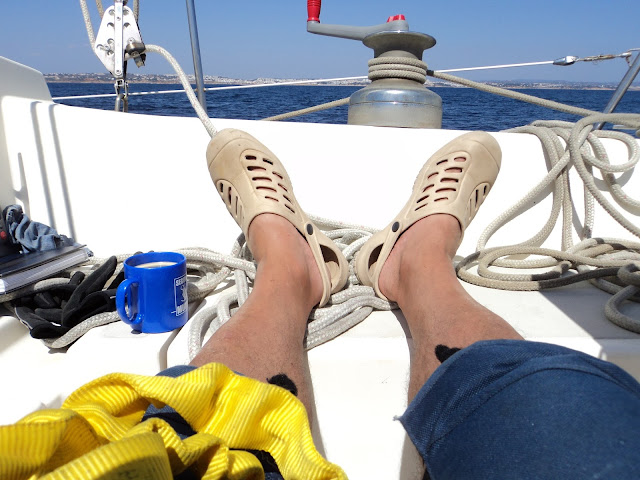 Yesterday, in a very popular sailing blog I read that sailors who lead all their lines into the cockpit are mostly pussy sailors who don't venture more than 5 miles from the marina. The "expert" blog also listed all the merits of keeping the halyards and reefing lines at the mast. It sounded good in theory, and maybe it really is good, but I like my system better, only from experience you understand.

Except for the topping lift, I lead all my 17 lines into the cockpit:

That must make me the biggest sailing pussy ever!


I'm no sailing hero. And to be honest, I didn't even learn much when I crossed the Atlantic from New York to Portugal, which included a rough 3-day storm (9 m waves). On the other hand, I have learned a few things on my annual sailing cruise from Peniche to the Algarve (12 times/years), either solo or with relatively inexperienced crew.

It's not the notorious Portuguese northerlies, the fog or the fish-net buoys that make sailing this coast challenging - no, it's the damned capes. In summer the wind near the capes can pipe up from 5 kt to 40+ kt winds while you're having a pee in the head.

But after a few trips, hopefully you learn exactly when, where and at what time to reef and prepare for the fury. I say "time" because a cape can be sleepy calm in the morning and furiously wild in the afternoon on the same day.

The problem is when you're expecting bad and, instead, get a taste of hell.

Almost every year I sail solo from Alvor to Sagres in late August. It's only a 20 mile trip, and by the time I have breakfast, go ashore and get ready, it's nearly lunch. Normally there's no morning wind in these parts, so it makes no sense to leave early anyway.

So you leave with a nice north-northwest breeze all sails up, go past Lagos between Ponta da Piedade and the fish farm sipping on a cup of coffee and enjoying the view. Later, as the air over land starts to warm up and rise, the cooler ocean air rushes in to fill the gap, picks up speed and blows a stiff breeze down the cliffs on the southern side. The wind increases progressively and you start feeling uneasy as the boat shoots forward under sails drawn hard and tight. 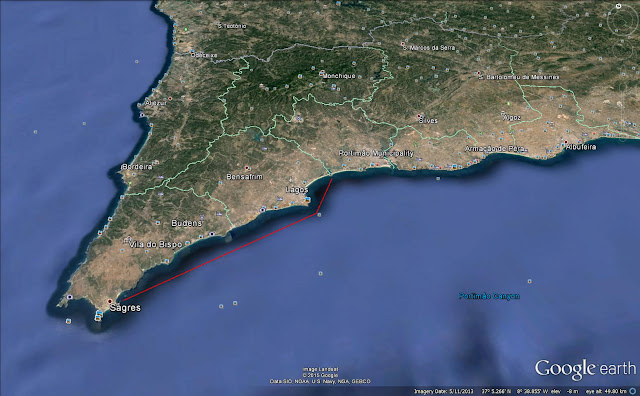 That's when I go through the paces of putting in the first reef in the main and then roll in a third of the big genoa. As I sail toward Sagres, it gets even hotter and and more windy. Soon I've put in the second reef and also furled the genoa to half its size.

Sooner than expected, and without warning, the shotgun blast comes thundering down the cliffs making the water boil. The mast creaks tight, the boat heels sharply, and my ears are full of wind as the boat picks up even more speed. I'm sailing a Corbin 39 and it's built for the fight.

When the hydraulic autopilot starts struggling against the weather helm, I ease out the main and then slowly roll in the genoa all the way while slacking the sheet. The hank-on staysail always stays up no matter what.

I pull in the main a touch to keep if off the spreaders. I've still got weather helm, but it's manageable. Then I cross an invisible line into hell and the blast rips the hat off my head, the boat lunges over and, shit, you know its going to get worse. I ease out the mainsail, this time to the spreaders, and manage to roll in the genoa all the way. My ears are full of howling wind and I'm gritting my teeth and curse for never having installed the third reef line...and I probably never will.

In the distance I see a sailboat motoring toward me with no sail up and heeling, and I also see the surface froth over the dark ripples. The Rutland wind generator is whining insanely like a low pitch siren, then breaks into a loud free-spin swisssssh when the thermal cutout is triggered, only to repeat the whining-swisssssh cycle over and over. When the wind generator does that you know you're in over 40 knots.

My mouth is dry and I have to act fast. I tap on the autopilot "+10 button" 3 times, the boat slowly turns toward land, stabilizes, and I tap the "+10 button" once more. I release the mainsheet and the main sail almost goes limp, the boat straightens to nearly normal and my mouth is getting drier than dust.

I release the main halyard clutch, pull on the downhall line until the sail is nestled in the lazyjacks, not too neatly but good enough, and I cleat it off. Now I press the autopilot "-10 button" 4 times and continue sailing toward Sagres with my staysail and hardly heeling.

I relax in the spaghetti-filled cockpit which I haven't stepped out of and cross paths with the sailboat that is motoring. I can't help notice that they have winches on the mast and no sail up at all - pussy sailors!