Continued from Part I and Part II

Anyway, there I was in the bay of Sesimbra with a fouled propeller letting out my chain with the manual SL 555 windlass. I tightened the clutch when I thought I had plenty of scope; then I decided, "ah what the hell, I've got no engine so a few more meters won't hurt."

I released the clutch, the chain clattered over the gypsy, snaked out of the hawser pipe and disappeared into the water with a sickening splash. Gone! I stood there on the bow looking at the hawser hole and at the ripples in the water not feeling anything in particular. I was numb, dumbstruck...WTF!

Since I had changed the chain end over end this spring, my first nauseating thought was that I forgot to shackle the bitter end. But I did, I was sure I did. My stomach was tightening and my tomatoes were drooping.
I lunged for the Fortress FX-11 linked to 3/4 inch nylon rode in the port sail locker, cleated the end and threw it overboard.

The Fortress FX-11 weighs 3 kilos...tied to a 3/4 nylon line. What a fucking laugh, it probably never even reached the bottom. Typical useless backup nonsense.

I should have immediately pushed the MOB (man overboard) button to record the site of the sunken Rocna. Jakatar was slowly drifting out to sea and I had all the time in the world to set up the 25 kg anchor secured down below in the dungeon.

Gotta finish writing this before I fall asleep. So I pulled in the Fortress that was happily bouncing on along the seafloor at the end of a huge nylon line, stowed it, dove into the dungeon below, unsecured the ugliest (also probable Chinese) anchor I've ever seen - damn heavy though - and substituted the Fortress with this huge hunk of metal.

Meanwhile, the wind was stiffening and shifting north, blowing almost straight from the bay. Two hours later and on the third attempt, I finally managed to sail in and anchor in an acceptable location not too close to the rocks.

I immediately dove in, cut the lines and removed the jug stuck on the propeller, started the engine, tried the transmission and everything looked good.

I noticed that I was dragging slowly; so when night fell and the wind died down I decided to move closer to the port, closer to where I had lost the anchor.

With the engine running, I slowly pulled in the line with the windlass drum, working up a sweat and completely fatigued on this hellish day. When the anchor was dangling out of the water I engaged in forward and began to move...very slowly for some strange reason.

"Fuck! the transmission is shot...what else could go wrong," I was thinking when I heard the same Cacklunk noise and the engine died. Shit, shit, shit, lines in the propeller again. Yup, the anchor had fished up old lines and nets that were just dying to wrap themselves around the propeller and shaft.

I let the anchor down before realizing that the boat wasn't going anywhere and that, in any case, I'd have to free the anchor. Except now, I could hardly lift the anchor above the waterline and, after failed attempts, I lashed a kitchen knife to a broom handle and slowly cut the lines and net.

I was pooped, drank two glasses of wine, ate some cookies and went to bed feeling downright disgusted.

Another urgent translation came in just now, I'm taking the bus to the Algarve on Friday morning to crew for a friend returning to Peniche or maybe bring up a boat on my own. So, you guessed it, hell in Sesimbra will be continued.....there's still a lot more fun to come.

Continued from Part I


I threw the lifesaver overboard and slowly descended the ladder with the cutting knife dangling from my wrist. When my feet were immersed in the cold water, instead of shivering about it - like I usually do - I immediately dropped myself into the big blue ocean.

I dunked the goggles, drained them, slipped them tight over my face and dove.

I cut the the first thing that came to hand - the rope rising from the bottom. What an idiot! I had just set the boat free and now it was moving. I came up for air, held on to the ladder and thought, "If the boat is moving so will I, I'm a good swimmer." I realized the lifesaver would be no help; it was downwind and floating faster than the boat. "I'm a good swimmer," right!

After a few deep breaths I dove again. The three or four turns of rope around the shaft and the plastic buoy impaled on a propeller blade were clearly visible, but I couldn't reach them in time. I dove again, but it was no good and I climbed aboard swearing.

At least I was free now, free to unfurl the genoa and sail in the light breeze toward the bay and port of Sesimbra.

I slowly sailed about 7 miles to Sesimbra feeling fairly calm. I didn't even take the wetsuit off. The plan was to anchor in the bay, finish the rope-cutting job and keep sailing to Sines.

On approaching the bay, the breeze picked up and I began to furl the genoa slowly, occasionally pressing the autopilot's -10 button. The boat skimmed the water close-hauled toward the beach. The depth sounder read 20 meters, 15 meters, 12 meters...then I turned the bow into the wind, hurried forward, released the big Rocna to the sweet sound of chain rattling over the windlass drum.

It was almost too easy.

I hadn't yet discovered that I really wasn't solo sailing, that Murphy and his law had sneaked aboard in the Cascais anchorage. I was about to fight a long exhausting battle with Murphy in this bay.

The ill-fated voyage of Jakatar - Part I

I spit overboard and watched my saliva bubble bobbing in the waves quickly drifting away from the boat.

Ten minutes earlier, I had been looking at another sailboat through binoculars when I heard a loud rattling noise, felt the boat shudder and heard the engine die. A few feet away to starboard, a blue plastic jug confirmed that I was in deep shit.

I didn't have to look to know that Jakatar's propeller shaft was fouled by a thick pick-up rope for a fishing net. I was now forcibly anchored to the seafloor about 2 miles NW of Cape Espichel.

I had only one option, but I didn't like the speed at which the spit had drifted away, I didn't like how the waves were heaving the boat up and down, I didn't fancy diving in, and I was alone.

Only a few hours earlier - on the second day of my trip - I had crossed the Tagus River mouth without a care in the world. Even a Chinese freighter steaming straight for me failed to rattle my good disposition. I was going to the Algarve on a beautiful sunny day. 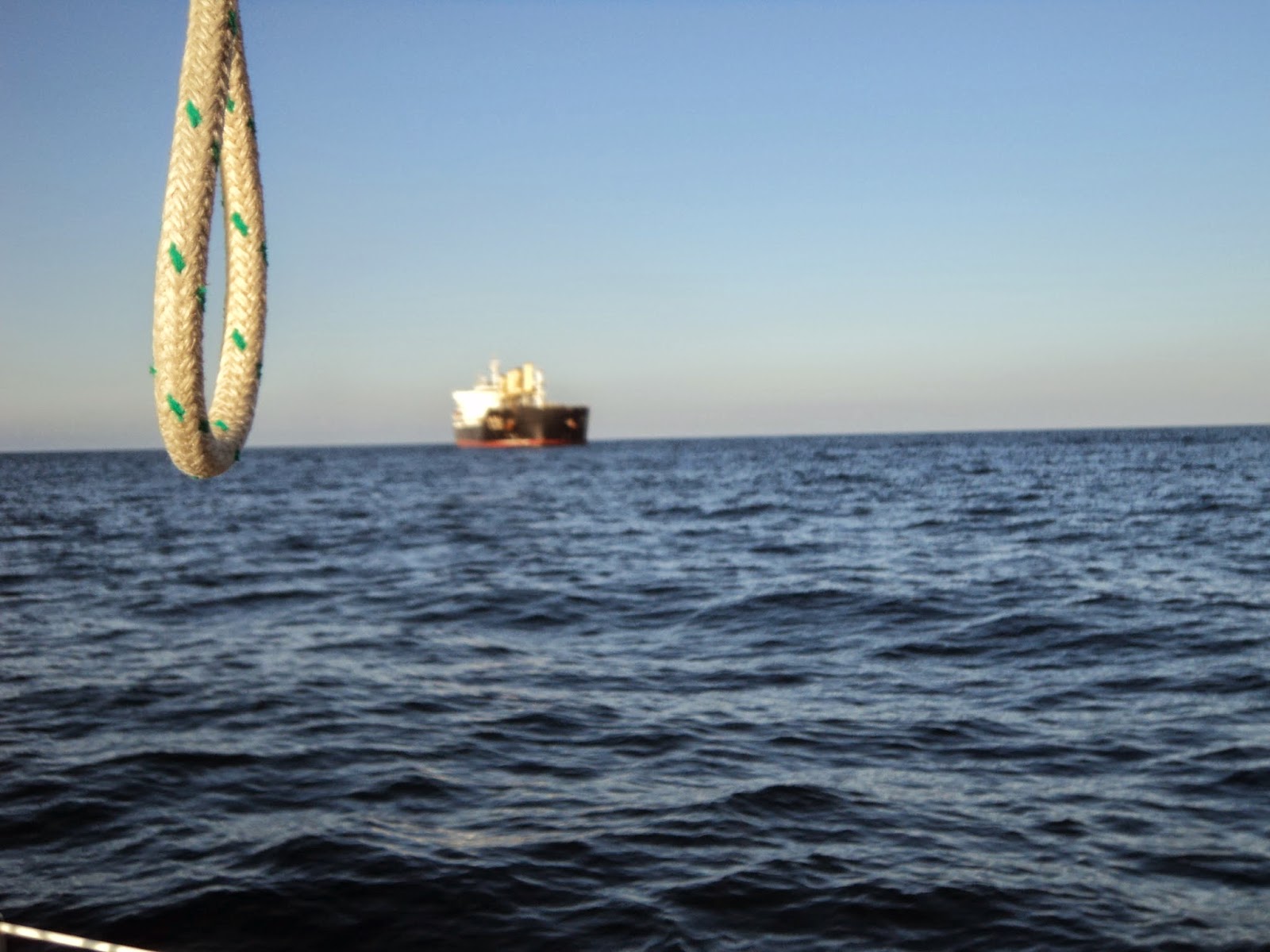 I dug out my wet suit and knife and smiled one last time.
If I got swept away by the current, if I got my head smacked by a bouncing 11-ton boat or if I got entangled in the line, this would be a fitting picture to remember me by. If I disappeared, the fishing vessel would come to retrieve the nets and this photograph would look great in the evening news and the next day's papers.

I'm writing this post so, obviously, I made it back aboard.

If I had known what was coming next, I would have never smiled.