One thing I really enjoy about the Peniche Marina is the transient dock.

It's low season now, so naturally the transient dock is full of French boats. Are French sailors cheap or are they simply more adventurous? Another interesting aspect is that they have a tendency to keep to themselves. Maybe that's why they cruise off-season, to avoid the crowds. Who knows. 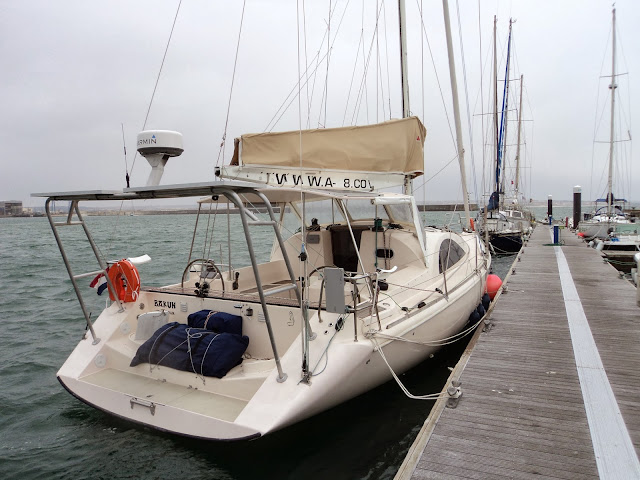 Here's a boat, supposedly made in Poland, that is a complete contrast to mine. The cockpit is huge and inviting. The bow is thin and perfect for slicing through water. I bet it's fast, and I like it. Don't know how safe it would be in a storm, but you'd take your chances, wouldn't you? 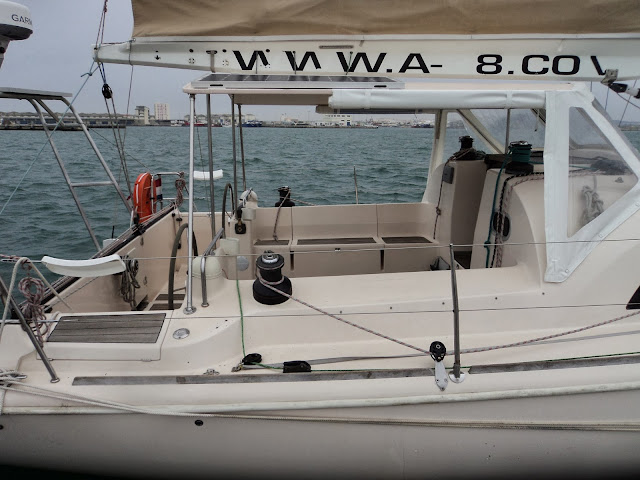 A partial hard dodger with roll-up side curtains, mainsheet control near the wheels, carbon mast...and an electric roller furler. On the other hand, the interior is probably equivalent to that of a 32 footer, but I wouldn't complain.

On the other side to the pontoon there's an old, but nicely kept and sturdy-looking, 22 footer with a tiny cockpit. It also sailed all the way from France and will probably end up at some exotic port. The trip likely took three times as long but, as one sailor once said, "when I'm on my boat, I'm already where I want to be."

As I stood on the pontoon daydreaming about owning such a boat - the larger one, that is - I got a phone call informing me that I had been emailed work. Work, what a dreadful four-letter word.

Dragged my feet back to Jakatar with its small cockpit and huge interior. Obviously you can't have both, can you?

I can't decide if my lunch looks appetizing or revolting. It's turkey beef, baked eggplant, zucchini slices, black beans, rice and the white droopy things on top that look like fishing bait are pieces of onion. I forgot to buy wine, ran out of tea and thus had a cup of water. 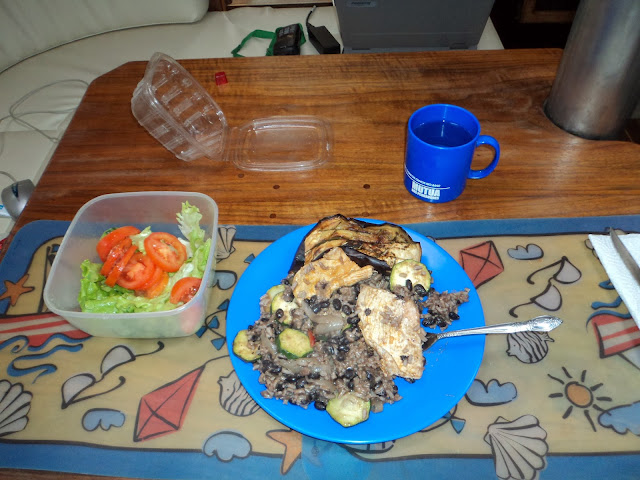 In the morning I decided to give my electronics some exercise to burn up moisture. My inventory consists of 1 fixed and one handheld VHF, hydraulic auto pilot, Magellan chartplotter, computer chartplotter, handheld GPS, depth sounder and an electronic Ritchie compass. That's it. I also switched on the running lights.

Email ThisBlogThis!Share to TwitterShare to FacebookShare to Pinterest
Labels: Made in Poland, Peniche Marina, Port of Peniche, transient dock