There ain't no sunshine anymore

The sun has suddenly vanished, and I'm not exactly thrilled about it. Winter's first grey days reminded me of this song performed by Joe Cocker.


I'd rather be on Jakatar Motor sailing north than sitting in the boat listening to rain and wind. "Strong-willed individuals are not affected by the weather," the experts say. Send the experts to Alaska for a couple of years and then ask them what they think!

Although Jakatar is of closed-cell airex sandwich construction above the water line - which makes it condensation-free - I still went out and bought a dehumidifier/heater. There's nothing like a cozy, warm bone-dry interior. 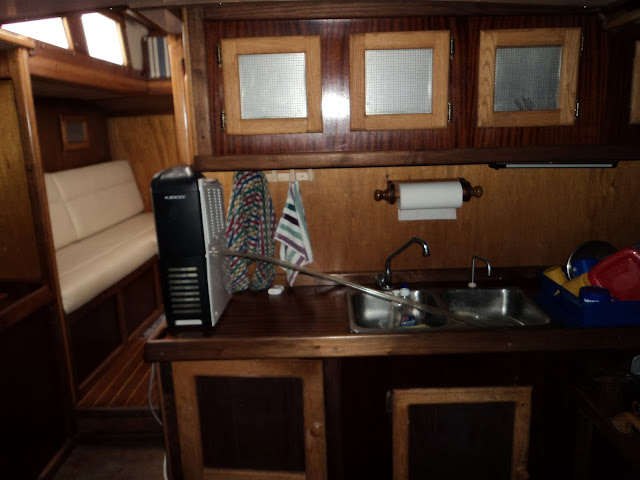 Look at the flag. It was nearly perfect last week. Lucky the police didn't fine me for insulting Portugal's symbol of glory. Kinda of looks like what's happening to my hairline. 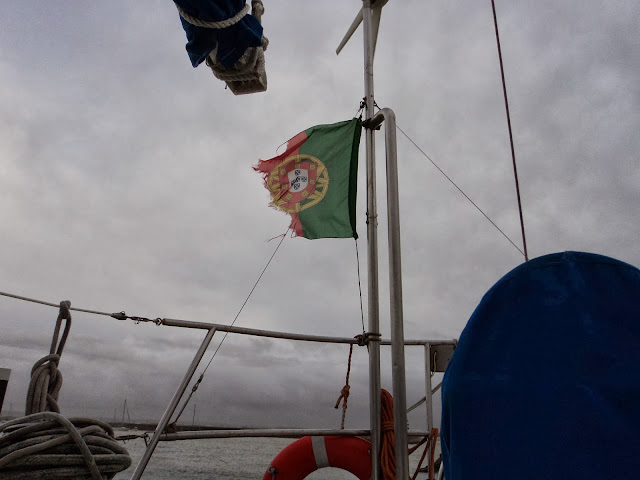 The entrance is rough and murky. This heavy trawler was dancing in the swell before it entered the port. 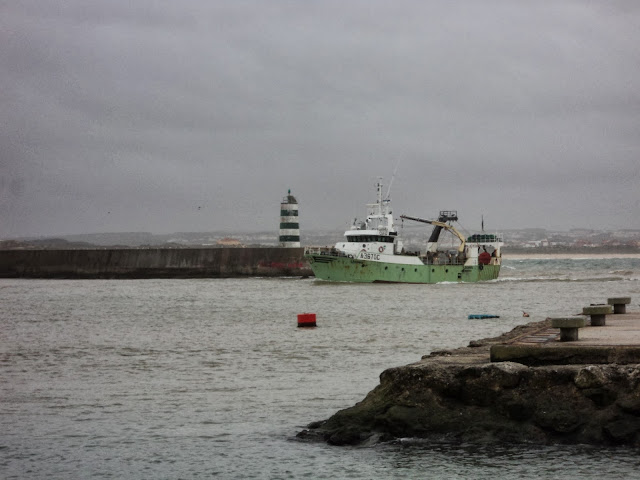 See the ketch in the middle. It's on the mooring I sold to Antonio and consists of three 1-ton concrete blocks placed in a triangle joined by about 500 kg of ship's chain. The blocks are probably buried in the mud by now. And, yes, I really do feel like an idiot - you could moor an oil tanker to that. 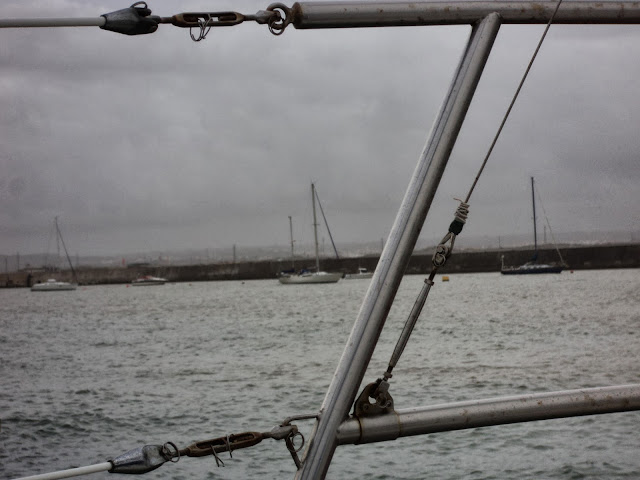 Funny thing too - when I sold the mooring I was the only boat out there. What's not so funny is that I sold my bullet-proof mooring, and the marina is falling apart. We may be looking at a change of scenery in the not too distant future. Hey, when you're alive and kicking, anything can happen.

This week I went to my floating office on Wednesday instead of Thursday; blame it on a dentist appointment.

Instead of the fabulous hybrid sailboat (featured in my last post), I found this beauty parked across from me.

I don't care what you say, this boat has style...well, maybe more so 20 years ago. It's a classic that sails,  has a big anchor, and plenty or deck space for surfboards and a dinghy. Most of all....most of all, I like the way it stands out. Additionally, it makes you want to see the adventurous crew, which surely includes at least one gorgeous woman wearing shorts and a loose blouse.

Behind it, there is a no-name cat.
It's definitively worth way much more than the other boat, but somehow I'm not interested in the crew that I never saw by the way. To think of it, the gorgeous woman is probably on this boat.

The Rip Curl world surfing championship is taking place 500 m from here at the Supertubos beach, and I'm too busy translating to have a look.

I'm home. This means work, having the boat at the marina and getting mentally prepared for winter. Without snow, winter is merely a cooler, rainy version of summer.

Being home also means making the boat my office on Thursdays. I love going to the marina because it's a playground for grown men and the odd woman. With a transient dock, there's always something going on or something new to see.

Now look at this sailboat berthed across from me and which I baptized the hybrid boat.
Without the masts it would be a sleek trawler. It could also be a motorsailer or a a funky sailboat. The masts are tall, and it has a generous sail area so I wouldn't be surprised to see it sail fast (maybe not upwind). It's also difficult to ascertain whether it's a very expensive factory-made boat or an affordable but excellent home-made vessel.

The unlucky sailor is back. The boat is in the water and, by the look of things, it's getting ready to go somewhere.
I was talking to Ryker (who's also back for the winter season) when the 68-year-old owner walked slowly down the pontoon - tall, shoulder-length blonde hair, in a T-shirt, jeans, sandals, amazingly looking like Neil Young, or what I image Neil Young to look like these days - the perfect match for his boat and a perfect contrast to the snappy dressed, well groomed owners of the hybrid boat.

I have a translation to finish, but I'll be back. Ciao.

The wind howled in the Cascais anchorage. I checked out my food supply: a can of baby mackerel, a few onions, 4 very old rusty cans of whole tomatoes, lots of pasta, olive oil and a big bag of cheap cookies. Oh yes, and plenty of wine.

If you read the last posts, you'll know that every attempt to go shopping had been aborted. I did go ashore in Sines, but it was late and all the shops were closed. I had rushed straight to the Adega de Sines restaurant, which is way more important than hunting for an off-hours grocery store.

Anyway, I fried the onions in olive oil, boiled plenty of pasta, added some spices, poured the wine and finished with a few cookies for dessert and more wine. A perfect meal.

Then Délio, a former neighbor's son, called me on the mobile. I had ran into him in town before the trip, and he was really keen on joining me on the Cascais-Peniche run. Now he was all gung-ho for it along with his younger brother (younger as in 25 or so) and another friend.

I described the conditions, but he said it was a perfectly calm evening in Praia da Areia Branca.

"OK, be here at 6:30 am and bring food because I'm cleaned out," I told him. I knew rounding the cape might be hell tomorrow, but saying so would give them the impression I didn't want them to come along.

"Where will we meet?"

"Go to the marina fuel dock, and I'll pick you up."

They called at 6:30 sharp the next morning. It was dark and I was awake but still lying in bed listening to the wind blowing not so hard anymore.

I pulled up anchor and re-anchored closer to the fuel dock and reception pontoons that were packed full with boats that either had been too scared to enter the marina the previous night or whose anchor had failed to hold.

I ferried Délio and the others to the boat in the dinghy, and then we motored along the sheltered coast toward Cabo Raso where the nasty stuff happens. As we approached the cape I could see the whitecaps like little waves breaking on the beach. I thought about the towed dinghy but, being an idiot, rationalized that it was the wind and not the waves that had capsized it the day before. Conditions would improve after 5 or 6 miles, and the wind was nothing compared to yesterday.

Right! As we rounded the cape, the wind blasted in our faces and the enormously steep chop had the boat bucking like a rodeo bull. The engineless dinghy capsized immediately. As hard as we tried we couldn't upright it. Instead, we hung it from the transom high enough so that only the end of the tubes were dragging through the water. But it was bouncing around, the secured oars were flapping all over and I felt like shit for torturing my new dinghy.

Fortunately, these guys were well prepared with delicious sandwiches, fish sticks and other goodies. They're all surfers so they were having the time of their life. They wanted to raise some sail. I explained that we'd end up in the Azores if we attempted to sail, and their food supply wouldn't last that long.

Conditions settled down after Cabo da Roca. We released the dinghy back in the water and plodded on to Peniche.

I can't tell you how melancholic I always feel on reaching home. If I could, I'd sail back south the very next day. Home means working long hours, cutting the grass, going to the dentist...ad nausea. Home is where you get old waiting for next year.

I get over it or, rather, I surrender to it after a week or two. What else can you do? I won't answer that.

At 7:00 am I motored through the large Port of Sines for the 52 mile leg to Cascais...and continued to motor all the way there.

I stubbornly raised the main and stay sails for some motor sailing, but that didn't last long and didn't help much either. My speed varied greatly - sometimes from 4 to 5.5 kt - probably caused by the tides flowing in and out of the Setubal and Lisbon estuaries.


Other than getting annoyed of listening to the engine - gotta soundproof the engine compartment some day/decade - the trip was fairly dull. So dull that I even played chicken with a cruise ship. These floating islands are deceiving; it looked like a toy ship in the distance upriver and, in no time, it was looming large and heading straight for the spot I was also aiming for. He was approaching on my starboard side and had the right of way, so I throttled up and ran for it.


I was looking forward to a peaceful night at the Cascais anchorage, maybe a walk around the ritzy tourist town, maybe even dinner at the only somewhat inexpensive restaurant I know.

The choppy water in the picture above kept getting worse and the wind began to pick up as I approached land. OK, so I've been here plenty of times and know the score: the wind barreling down the Sintra mountain can get pretty fierce in the afternoon but normally settles down after the sun sets.

I'll give it to you straight: all my hair got blown to one side, the towed dinghy got blown out of the water, flipped over and was being dragged violently upside down. The water churned in white froth.

I could hardly hear the engine anymore. As I approached, I saw a lot of boats either anchored or motoring around, even a small sailboat sailing back and forth with a tiny piece of genoa rolled out. I surmised that some boats had returned from a Saturday outing and didn't dare enter the marina and that others simply didn't have an anchor fit for the job.

I decided to anchor way back in deeper (9 m) water away from the danger of having somebody drag into me before I had time to act. On the first attempt, by the time I ran up to the bow and got ready, the boat had blown far from where I had planned to drop the anchor. The second time I motored up farther and just let the anchor fly. Was I ever so happy to have just bought a 25 kg Rocna.

I went down below, got my glass of wine and watched the chain get tight as a steel bar and the chartplotter showing 0 speed. A very large sailboat arrived later, decided to anchor out by the anchored ships and was slowly blown away. It, a dark racing sailboat, returned the next morning and entered the marina.

When I crawled into the aft bunk at 11 pm, the wind was blowing strong as opposed to insanely ferocious.