I ate a banana, raised anchor and then motored out of the Sines anchorage at 5:30 in the morning. Darkness was turning to dusk and an extremely loud rock band was still playing to a thinning crowd on the beachfront.

Don't ask me why I stayed two nights in this musical inferno, why I deprived my body of much needed sleep or why I drank copious amounts of wine to help me fall asleep.
So here I was embarking on what turned out to be a 14-hour sail feeling kind of groggy, but happy to leave a town I really enjoy under normal conditions.

I motored out of the large harbor, past some anchored ships all lit up, according to maritime rules, and then got hit by the swell. The last two legs (Peniche to Cascais and Cascais to Sines) had been amazingly smooth, but now I was rolling in the northwesterly waves with absolutely no wind to raise sail and steady the boat. 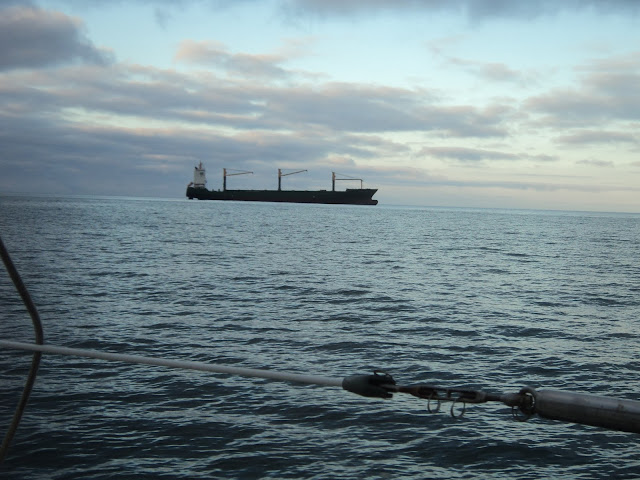 Motored for a few hours, got tired of listening to the Kubota burning up my expensive diesel and then raised all sail - that's three sails and the task takes some effort without self-tailing winches. I have a 44 m2 genoa as heavy as circus tent canvas and I need a winch to unfurl it in light wind.

Started out doing about 2.5 kt but didn't care because nobody was waiting for me in Sagres and the boat stopped rolling, almost.

There's a minor misadventure to come later in Sagres, but for now enjoy the video. Hey, don't tell my mother I didn't use a harness. At this point the sea was flat, but that's still a poor excuse.