Alvor is where you hang your sailor's hat, for a while anyway.

It has a lagoon, an endless pristine beach and a really long - I mean really long - boardwalk built on stilts over the sand dunes. Although it's 3 miles from Lagos and about 8 from Portimão (both with large modern marinas), highbrow boat owners tend to stay away because of the complicated entrance channel and because it's not posh. Let me give it to you straight - the Alvor anchorage is populated mostly by cruising boats with experienced anchors.

In town, the narrow hillside streets are lined with bars, restaurants and the usual tourist flytraps (sort of forgot to take pictures). The town is rather peaceful during the day and jam-packed at night, mostly with gringos from the United Kingdom. Maybe I shouldn't say this publicly, but I can't help notice that the Saxonic ladies have a thing about painted lips, low tops and tight skirts. On the other hand, I might be suffering from a solo sailor's ailment called "visual scurvy."

Best of all, Alvor has two dinghy docks and the water is flat calm - perfect for sleeping after a few drinks in town. Worst of all, the water is murky at low tide and there's no source of fresh water. There used to be a very convenient tap near the old fish market near the lifeboat house, but it was eliminated a few years ago. 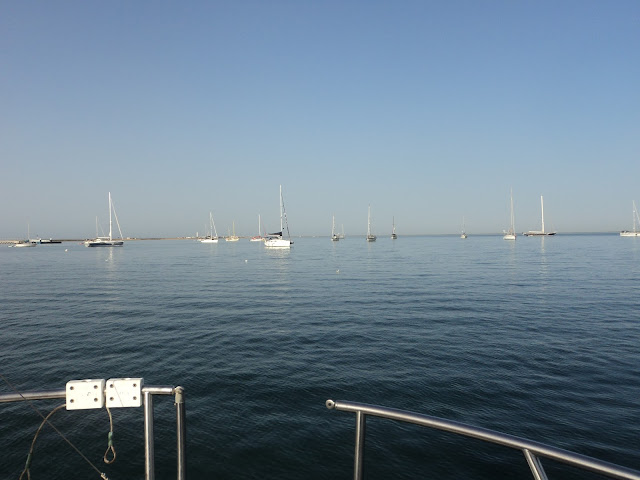 The afternoon before I left, I made arrangements with a taxi boat in Culatra to pick me up at the boat at 9 sharp. I described Jakatar, its position and name.

"It has Peniche written on the hull," I told him. Everybody in Portugal knows Peniche, not to mention that I was the only boat from Peniche.

At 5 to 9 I'm all locked up and standing in the cockpit waiting when I see a taxi boat slowly meandering through the anchorage and finally roaring off toward Olhão. I pulled out his business card and started dialing, got the number wrong (I don't have a smartphone and the keyboard is tiny), then got it wrong again and was just starting to swear when I heard a voice.
"Bom dia." I had been looking at the wrong boat and the right one had coasted silently up to me behind my back.

Boat taxis normally blast through the anchorage like madmen. This guy took off in that fashion but then abruptly slowed to a crawl with his head hanging over the side. I looked over the side too and realized we were in knee-deep water. Curiously, I looked for the depth sounder but there wasn't one.

"Don't you have a depth sounder?"

OK, that makes sense. We made it, I paid him twenty-five euros and he spent about 3 euros on gasoline by taking the shortcut.