Boat slaves never sleep. We're either working on the boat, busy making money to keep the boat running, researching about boat stuff or lying in bed thinking about the damned tub. The fact that non-boat owners can live a fulfilling life is a mystery to me.

Take note Corbin 39 owners, don't paint your overly thick gelcoat in a dark dull color. It will get really hot in the sun resulting in gelcoat crazing or cracking.
Up close it looks as though it was painted with a broom. From a distance it looks great, even the boat looks clean, which it isn't.

Not having any translations lined up for Monday, I drove to Nazaré early in the morning in an attempt to get Jakatar ready for the splash.
I aligned the shaft to the engine and re-positioned the stuffing box collar per instructions. Lacking spacers to align the shaft, I invented a new and perhaps better way.

Here are the instructions:

In my case, the top bolt was a touch loose when it reached the bottom position. To correct this, I raised the back of the engine a wee bit and got it almost perfect...almost so I'll give it another go when I'm in the water again.

I scheduled to launch on Thursday morning, after I clean up the unbelievable mess in the boat and cockpit.

Boat Without a Tail

You may be interested in a great blog about another sailor working toward the escape plan.

I finally removed the Voyager windvane that was heavily damaged last year when a 12 m sailboat crashed into it at the marina.

Jakatar looks kind of funny without its tail. All that's left are four holes on the canoe stern. Yup, the boat is slowly getting more naked; pretty soon I'll be eligible to join the minimalist club.
I also slopped on the first coat of enamel paint on the hull stripe. I think 2 more coats will make it presentable, at least looking better then the lifeless deteriorating dark blue that absorbed sunlight and got really hot in the sun, which caused the gelcoat to craze (fissure).

A friend, Paulo, also working on his boat at the yard invited me for lunch at his home on this gorgeous street.
José, an anthropology professor, also joined us for some delicious fried sole fish and "açorda," a concoction of mashed bread, garlic, pepper, olive oil, parsley - and whatever you might feel inclined to throw in - that was really good, accompanied with perhaps too much red wine.

During the meal we found ourselves in an animated conversation about the difference between "having, doing and being" and Paulo even sang a Fado song that was somehow relevant to all this. Lunch ended at 4 pm, and I went back to the boat yard feeling that socializing with the right people is what it's all about.

Replacing a Hurth gearbox with a ZF 12M

I'm pooped. Every muscle in my body is aching. Please do not try this at home under any circumstances!

I spent nearly the whole morning removing small screws with stripped heads from the pressure ring of the Duramax stuffing box. I tried every trick in the book. I even went out and bought a set of special allen keys - the ones with blades for more traction. What an idiot, all the time I had what I needed in a tool kit I bought long ago at Lidl.

Once I got the pesky little screws out, I got into mission mode and nothing was going to stop me - not even blood!
Now I need to align the engine, change the anodes, paint the bottom with two coats, scrub the topsides and a few other minor details. Easy, right? Non-boat owners must think we're completely nuts.

Oh yeah, one last thing: when I was trying to bolt on the new gearbox (holding the bellhousing with my teeth and right foot, thus leaving my hands free to hold the wrench and bolts), the silly thing refused to mate with the gearbox. I glanced over my shoulder at the old gearbox and my whole body, mind, soul and any hope of a fulfilling life crumbled into total despair...they weren't identical!!!!! But they were, it was an optical illusion. What a day.

Recently it was brought to my attention that somebody named their brand new RM 1060 sailboat after me. That's right, me HORATIO. Either the new boat owner has been reading my blog or he has a dog named Horatio. Take your pick.

You can find the "Horatio RM" boat at the RM Yachts website in their blog section. While you're at it, also check out their main site.

RM sailboats come in various sizes, feature really amazing panoramic pilothouses and have attracted a cult following. Did I tell you they're made of plywood? We're talking about an epoxy plywood shell reinforced by a galvanized steel structure. Unfortunately they also cost a small fortune. I thought plywood was cheap.

But what I really like about them is that they have twin keels and a very long rudder, enabling them to stand up like a three-legged dog at low tide. That's really useful for scraping the hull, changing a zinc or having a picnic in the shade under the boat.
Here's another crappy film shot sailing to Nazare on my Corbin 39, a more traditional boat. I seriously need to take film lessons.

Lastly, and sadly, I ran into a problem replacing my gearbox. To remove it, first I need to pull the prop shaft back. To pull the shaft back, I need to loosen some screws on the Duramax stuffing box. A piece of cake right? Wrong, two of these screws have stripped heads.


So I spent a couple of hours watching Youtube films teaching me the fine art of removing screws with stripped heads. Problem solved, right? Wrong. Where am I going to get new screws of the exact same size. I think I'm screwed and it's no laughing matter.


I emailed Duramax today urgently asking/begging for new screws. The problem is that they also manufacture stuffing boxes and many other parts for large ships, so I'm not too optimistic they'll pay much attention to my tiny screw predicament. Time to think like a Cuban in need of unavailable car parts.

On some occasions being a boat slave is a bit of a hassle and an impediment to a carefree life.

I woke up at 5:45 and immediately rolled out of my bunk. The previous evening I had fallen asleep like a baby fully dressed, and that's how I got up. After a wash and a change of clothing, I ate a couple of bananas, brushed my teeth and was ready for the day.

When I poked my head out the companionway it was as still and silent as an oil painting and the water was like silk. Looking around I spotted a hose on the pontoon and decided to give the filthy deck a wash down. My running rigging is so grimy it's embarrassing I tell you. A naked boat is one thing, but a dirty naked boat is quite another.

As I was rolling up the hose, a friendly young GNR policeman walked down the pontoon to check me in. Just for the record: Portuguese GNR working at ports are as friendly and helpful as they come. You may be unlucky to come across a sour puss in a bad mood, but that's a rare exception.

It turns out he owns a sailboat too so we talked at length about sailing, anchorages, marinas...a perfect morning.

Then I went to the yard, talked to the travelift operator, checked into the marina, had breakfast at the café/grocery store joint, trotted back to the boat, motored around to the yard and got lifted out - everything smooth as could be. I'm getting to be an old hand at this.

Walked to the bus station, but instead found a building under construction. This old lady told me where the new station was - which turned out to be a temporary container with a ticket wicket where the buses stop in the street. Bought a ticket on the 15:10 express bus, found a café serving a cheap "mini prato" lunch with wine and then took a long leisurely walk around town. Killed some time sitting on a bench facing the beach and ocean. Why can't I do this every day?

Shot some film during the trip but left the camcorder at the boat.

I finally made it to Nazaré, by boat! Nothing to boast about, but I'm here and it's the best two days I've had in a while.

The day began at 5 am so I could finish a translation first. Then I roared out of here at 9 am, bought two jerrycans of diesel on the way to Peniche and stopped at the bus station to get a bus schedule for getting home from Nazaré...by the time I got organized and clunked the boat into reverse at the marina, it was past 11.

Hardly any wind or waves. I was hoping for a light breeze so that I could at least motorsail, but no luck. Raised the mainsail anyway to make people on land envious. Kept myself entertained dodging a maze of fishing buoys for the first few miles.


I started out doing 4.5 knots at 1800 RPM. Not bad for a boat with a bottom growing a two-year beard and a propeller encrusted with mollusks. Later, when my velocity gradually fell to 3.6 knots, I thought the sick gearbox wasn't going to make it. Not a good situation without wind to sail back.

I even worked out a plan if I lost power out here. I'd tie the boat to a fishing buoy, wait for the fishing boat to come out and then offer them 200 euros to tow me into port.

Opened up the engine compartment, put my hand on the gearbox and OOOH, it's hot. That's it, I'm doomed, I concluded.

The hot heat exchanger hose was lying over the gearbox, so I did this:
I also toyed with the idea of sporadically pouring water over the gearbox to cool it off. Instead, I reduced the RPMs to 1600.

I also thought about putting on sunblock, instead I did this:
After concluding that the gearbox is supposed to run hot, or after I stopped worrying about it - forget which had more influence - I went back to 1800 RMP and the speed shot up to a dizzying 3.9 knots. When you're going that fast, it's important to keep an eye out for these guys:
About 2 hours from my destination a breeze actually filled the sail and pushed the speed up to 4.3 knots until it died down on approaching the port of Nazaré. 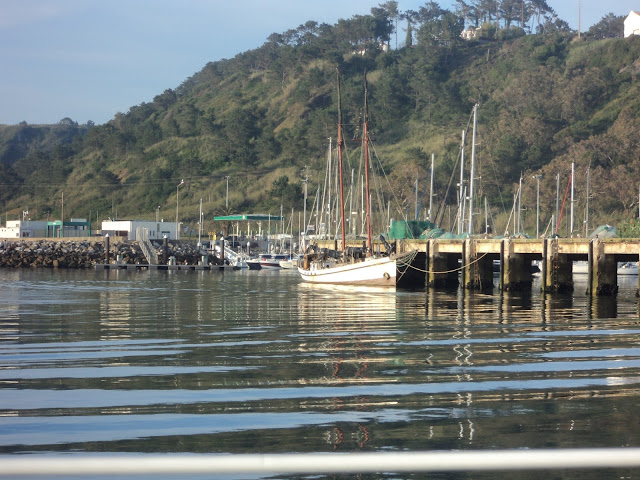 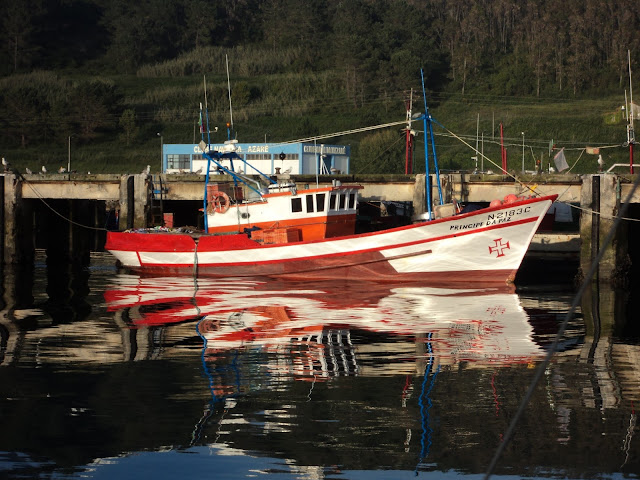 Docked like a pro, which isn't always the case, cleaned up, put the position markings on the toerail for the haulout straps, had some sandwiches, drank two glasses of wine, lied down on the pilothouse settee to relax, fell asleep and woke up at 5:45 feeling that life was grand, at least for now.