Some days are nothing but trouble.

With one leg into the companionway I glanced at the transient dock and saw that the unlucky sailor had returned to his boat. Then I saw the sky filled with seagulls and I still had time to take a shot, too late but better than nothing.
﻿
Ever since the wind generator died, I've developed a habit of checking the house battery voltage whenever I'm at the boat. Today it read zero. Damn, the meter is malfunctioning, I thought. When I switched on the panel, still zero. Turned on a light, nothing. Shit! How could that happen?

Pulled out the switchboard, nothing looked out of place.
Got out the 5-amp charger. Let's see, 220 amps at 5 amps per hour and the battery will be charged in 44 hours. Actually a lot longer, but I'm not going to explain why that is. No need to calculate anything anyway because the charger's fuse blew right away. That's because....ah, hell I'm not going to explain that either.

At least the engine's battery was charged (I keep the two batteries separate), so I fired up the Kubota and those amps just loved flowing into an empty battery. When I had it up to 11.00 volts I stopped the engine and drove to Intermarché for a box of wine and a pack of car fuses.

Back at the boat, I changed the fuse on the charger and went to work on a translation as the sky got dark really fast. 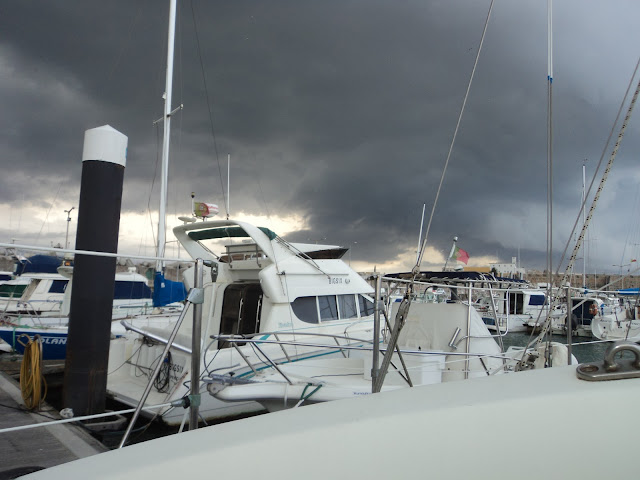 But that's OK. I'm cozy in the boat and the battery is charging. Then it started pouring rain and the electricity went out. Started the engine again. That battery needed some serious amps; and I need to figure out what happened.

Called Fernando, the marine electrician, but he was busy all day. Maybe tomorrow. I'm a translator, I have to work tomorrow. You can see the frustration building up, can't you?

Instead of staring at engine gauges, I decided to dry the bilge. On doing so, I noticed that the water was greenish, the color of the antifreeze. Sure enough, antifreeze is dripping from the thermostat housing. It looks as though it's cracked, can't really tell where it's coming from.
Damn, Damn, another problem and my translation is sitting in the laptop waiting for somebody to get working on it.

Wiped the leaking antifreeze with a paper towel to see where it's coming from. Not too easy while the fan belt is turning. Finally, gave up. I'm not sailing anywhere until Spring.

Barely got any work done, the battery settled to 12.0 volts (pretty much empty). Got so pissed I had to write about it.

Another red sunset and a couple glasses of vinho tinto and I'll sleep like a baby. 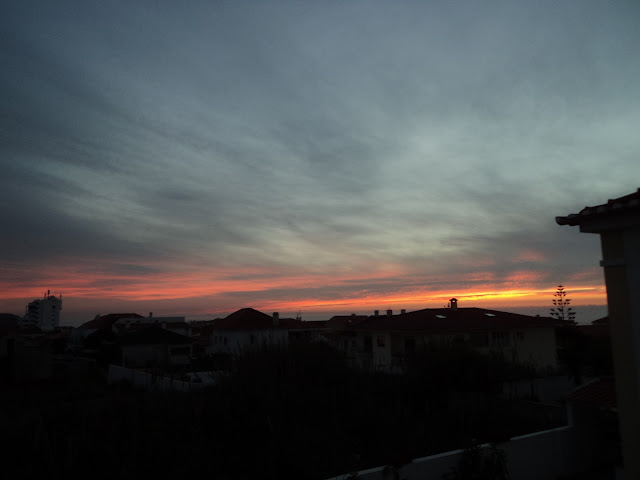