Are you getting bored with your window view? Here's a better one to cheer you up.


From my place it's a 30-minute walk along the beach at low tide, but I usually take the cliff-side road.

If the tide isn't low, I (usually Ana and I) have to scramble over two outcrops of slippery rocks which is kind of fun at first but then becomes "repetitive fun" - otherwise work.

On to the real topic of the day. I know...I know, I'm suppose to stick to one theme, but this is my blog and, like my life, linearity doesn't apply.

I'm on the boat in Peniche watching the battery charge. Contrary to common sense, I'm still using a car charger. But, since I'm not totally dumb, now I disconnect the battery so that any potential ground leaks can't eat away at my precious underwater metals.

I'd like to get the battery bubbling a bit to prevent calcification (or whatever you call it) but coupling a 5 amp charger to a 220 amp battery is like trying to fill a pool with a beach pail. I'm lucky to get it to 13.8 volts by the end of the day.

Then I hear the email "pling" on the computer and sure enough I have a small translation that lasted until lunch.

After lunch I went for a walk along the breakwater to look around.
﻿

Got back to the boat and another small translation was waiting for me which I quickly dispatched.

Dried the bilges (4 different compartments with two automatic electric bilge pumps), ran the engine in reverse for 10 minutes, packed up and went home. Picked a basket of figs and a bag of quince at the farm on the way.

Posted by Horatio at Friday, September 28, 2012 No comments: 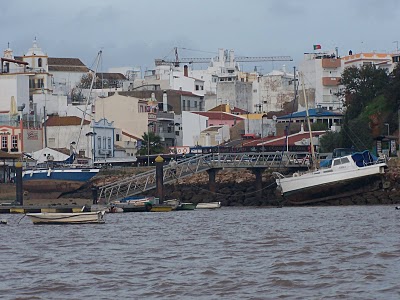 The 6 mile adventure to Paradise Island


Sailed with family and friends to the Berlengas Island twice during a 3-week period.

That pretty much summarises Jakatar's voyages outside the Port of Peniche so far this year.

What can I tell you? It's been a dumb year.

This has been a rather unadventurous year. Let's see, I also rented a kayak at Lagoa de Obidos for an hour and buzzed around the port in the dinghy with my 6-year old nephew. He wanted to go faster and complained the engine made too much noise.

Me, I've got no complaints. After all, what's to grumble about when you live like a yard dog.


I sat in the cockpit watching this act of "disgrace". Incredibly, I took this shot and then my camera's battery died. How did that happen? The other pictures were taken on the first trip.

The sailboat was anchored nearly on top of a vacant mooring belonging to a tourist boat. When the tourist boat arrived, the respective owners began arguing...what else would they do? The dumb-ass sailboat owner thought he was entitled to be there simply because he got there first.

The tourist boat owner went ashore on a dinghy and gesticulated to the idiots to keep their boat off.

Went ashore, and when I returned the sailboat was tangled in the other boat's mooring line. The tourist boat owner comes back shaking his head. Other tourist boat owners show up in dinghies and the consequent yelling, rope pulling and fender placing was a real treat to watch.

On the first trip an old French boat arrived and, let me tell you, these guys have "tomates". They're motoring close up to the rocks with a lead line measuring the depth wanting to anchor as close as possible. There's only patches of sand near shore but they got great exercise raising and lowering the anchor until giving up and sailing back to Peniche. Not before almost hitting the rocks.


For anyone interested in visiting the Berlengas, here's the ferry on its mooring, which I nearly drifted into while raising the anchor in 20 metres of water. The chain got stuck in rocks and had me worried a couple of times, but the anchor came up fine after a sweaty session at the manual windlass. 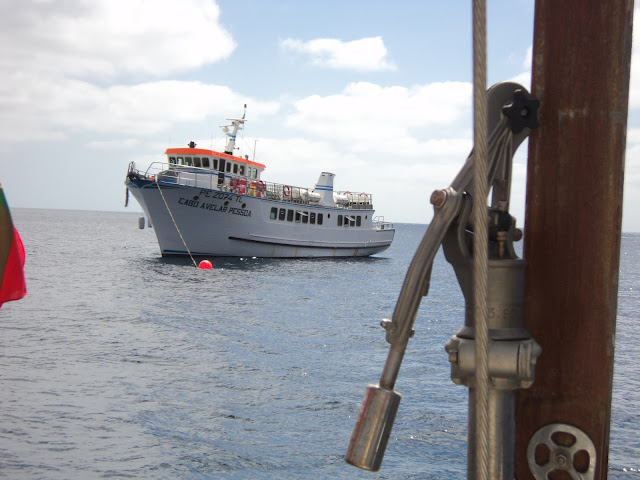