It's damn cold outside!!! As Hemmingway once said, "And then there was the bad weather."

A stiff breeze makes 10º C feel like ice. My apologies to anyone living in a seriously cold country. Hey, if I told you this picture was taken in the Caribbean, you'd believe me, wouldn't you?

Look closely at the fishing boat below and you'll see that it's called "Jamaica." 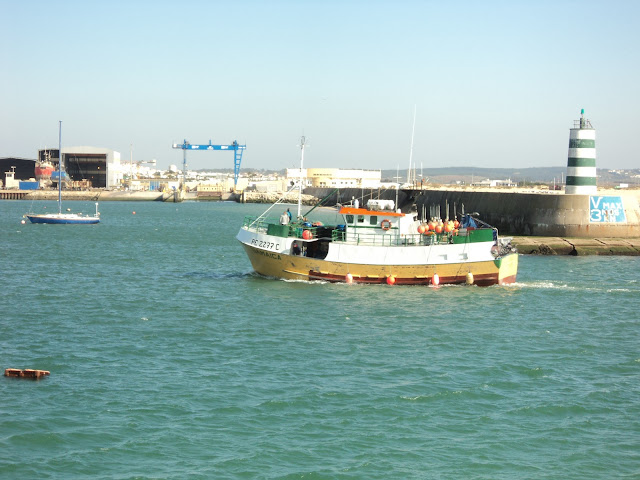 It's been a tough week. Got 3 hours sleep Tuesday night and been pushing the envelope for a week straight. Yes, even here on the boat, although it's nice and toasty with the heater on.

I'm ahead of the game now, so I can knock off for a while.

Had lunch, went for a walk along the pier and took these pictures. While walking, I had a brilliant thought: since I can't compete with all the exciting and fun sailing blogs written in exotic places around the world, why not take the opposite approach. You know, focus on being a masochist boat owner.

LOTS OF BOAT OWNERS COULD RELATE TO THAT! There must be thousands of sailors plugging away and dreaming about that fateful day when they are finally free to sail off somewhere, anywhere, as long as it's adventurous. Yeah, I'll say.

The problem is I've already done that. It's a bitch being stuck in the rut again.

Enough silly talk from a translator's fatigued mind. If any of your kids ever start talking about becoming a translator, send them off to the army before it's too late.

I think I'll go home now, get the fireplace roaring and fall asleep on the couch watching the news. Na, just kidding. Still got some work to do.