Trip North and Other Trivialities

During our four-day New Year's trip to Barcelos I spent half the time translating sitting on a chair in our room.
We were visiting Ana's family and were treated to food, drinks and the usual merrymaking that was fun but does not make great writing material.
While up north the office called to drop another bomb: one more translation for the 9th, a lawsuit involving millions which also puts my head on the chopping block: I have to start as soon as I complete the one I'm working on now and it's got to be good. OK, so I've been hearing these pep talks for years and I still have my head where it belongs, but barely.
Millions or not, Thursday was my boat day and off I went to the marina with my computer in hand.
There's always something new at the marina, and the picture below depicts this week's episode...live from Peniche. 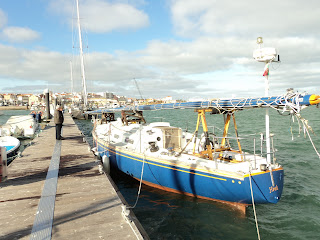 A local marine biologist bought this old Wauquiez in northen France and sailed it as far as Figueira da Foz (about 60 miles from here). For unknown reasons, he unstepped the mast there and then motored to Peniche. The mast seems to have a slight curve near the top. Would love to hear the whole story.

For those of you who have never motored with your mast horizontally, let me say this: unless you're just going through a canal, take extreme measures to secure it. It has to be fastened rock solid or you'll lose it in waves that normally you wouldn't give a hoot about.