Ana and I drove 15 km to Baleal for a change of scenery.
(Does driving from one beach town to another beach town count as a change in scenery? Sometimes I'm awed by my "logical" thinking! I really do have a degree in Philosophy, honest.)

Baleal, Peniche and the whole Silver Coast region is becoming Portugal's surf hotspot and and a mecca for board riders from around Europe and beyond. Surfing is now "the sport" around here, and surf schools and surf hostels are popping up everywhere.


It was a perfect sunny afternoon for wandering around the narrow streets and for visiting the uninhabited part of the island (it used to be an island, at least at high tide).

A long time ago, before recorded history and probably even before my very remote ancestors had any interest in inhabiting this part of the world, let alone surfing, a tremendously powerful convulsion jolted the rock strata upward forming this dramatic landscape and the island. 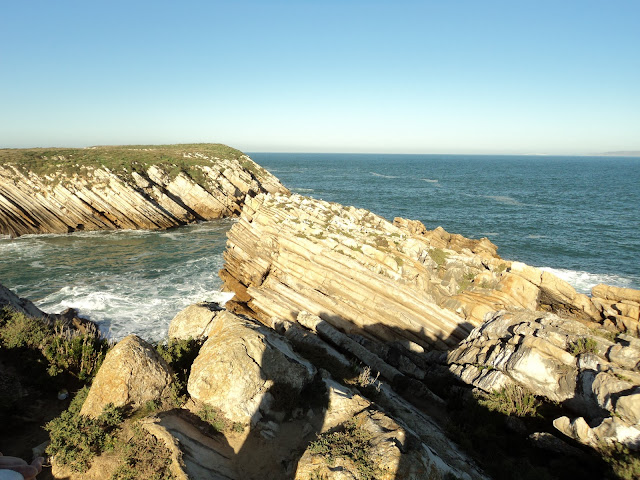 I assure you that it looks a hell of a lot more incredible when seen in person rather than through my mediocre camera. Not only that, but compared with the adventures featured on so many action-packed blogs that nearly leap out of your computer screen to grab your attention, this little trip doesn't sound one bit exciting...but that's the difference between reading about it and BEING THERE.

I got an email from the office saying that they need a report translated by next week...it's very important and absolutely necessary.

I'm the hired gun on this mission impossible. That's right, I'm the fireman, the ambulance driver, the saviour commissioned to handle fast complex jobs. Lucky me!

I'm like Horatio - from the detective series that I've never watched - hot on a mission. The difference is that I'm the REAL Horatio on a boring mision...not too exciting but real.

Once again, life gets pushed into the backseat. I dive deep into the work like a whale torpedoing toward the black depths hunting for giant squid. Somebody has to do it, right?

I will resurface...next week!
Posted by Horatio at Wednesday, December 28, 2011