From Zen to Zero

My life from Zen to Zero. I can’t get this thought, feeling or regret out of my head...even though it's a slippery path toward a life of sterile wishful thinking! I know I'm not the only person facing this dilema, but knowing that doesn't help one damn bit.


Zen does not reside in my beautiful house, equally amazing garden and ocean view, it’s not in the high-end furniture or in the jeep parked in the tiled garage and it’s not in the 39-foot sailboat at the marina either.  I've slowly driven Zen out of my life and replaced it with junk.


A very instructive blog called "zenhabits" by Leo Babauta will teach you how to develop Zen habits, and it definitively worked for him. I, however, hold a different perspective: sure habits are marvelous, but while habits iron out wrinkles and mold you into a more balanced person, what's really nipping at your heels is the burning desire to take that giddy leap of faith, to burst out like a caged animal.

You've read about it, you've watched it in movies, you've dreamed about it and you crave to be there...and "there" is whatever you truly desire and want out of life.  Perhaps it’s not that clear cut, but that’s how I’ve come to see it.


Zen to Zero is about a voyage in the opposite direction, about building a trap, either slowly or suddenly, the speed doesn’t really matter. And don’t blame it on TV, peer group pressure, social needs, your partner, lack of partner, bad luck or whatever. Blame yourself, like me.


So why don't I simply reverse the voyage back to where I started  instead of rattling on about it in a blog? Because, as I already said, we're not simply talking about habits but, rather, about gaining enough momentum to take a substantial leap. At this stage I'm still bleary eyed wondering how the hell I fell into this hole and also realizing that I have to deal with it before it's too late.

Additionally, Zeros are like alcoholics (alcoholics used to be sober and Zeros used to Zen, even if only in their childhook). First, we must admit our condition. We need to look in the mirror and confess it, to say it out loud, “I’m a Zero and I want to be Zen.” Say it a hundred times before you fall asleep, when you're bored or frustrated, say it until you really want it, say it until it’s true.


And what exactly is Zen? It’s the enchanted child inside of you that would rather watch seagulls on the beach than drive a Porsche.


I began writing this blog as my own form of Zen therapy, simply because I want it back.


How does a blog do that? It places my current situation and surroundings into perspective and brings back the focus. Writing is therapy. That's why there are so many bloggers. Just think, Leo stopped being a Zero after he started writing about Zen, not the other way around. 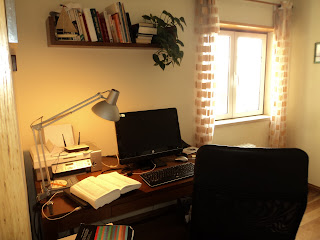 My office, my trap. 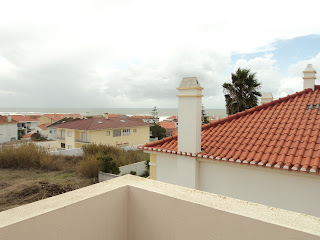 View from the terrace. Notice the stormy weather and waves just above the roofs.

Email ThisBlogThis!Share to TwitterShare to FacebookShare to Pinterest
Labels: building a trap